The following graph shows changes in the price of heating oil over the last 15 years. On average, this represents an increase of 10.4% per year. Nobody can, with certainty, indicate how the price of oil will change. Some say that scarcity will lead to an even greater increase, others indicate that its price cannot continue to rise in such a significant manner.

In order to be able to determine what the total cost of water heating will be in the next 15, 20, 25 years, we envisage three different scenarios. The first scenario corresponds to what has happened in the past 15 years, the second corresponds to a smaller increase in the price of oil, and the third to a very limited change.

For each of these scenarios, we can calculate the cost in terms of fossil energy without the Sunoptimo solar thermal system over a given period of analysis (dotted lines) and the total cost of water heating (with the Sunoptimo solar thermal system + fossil energy backup): solid lines. The black curves represent the first scenario, the red curves the second and the purple curves, the third. 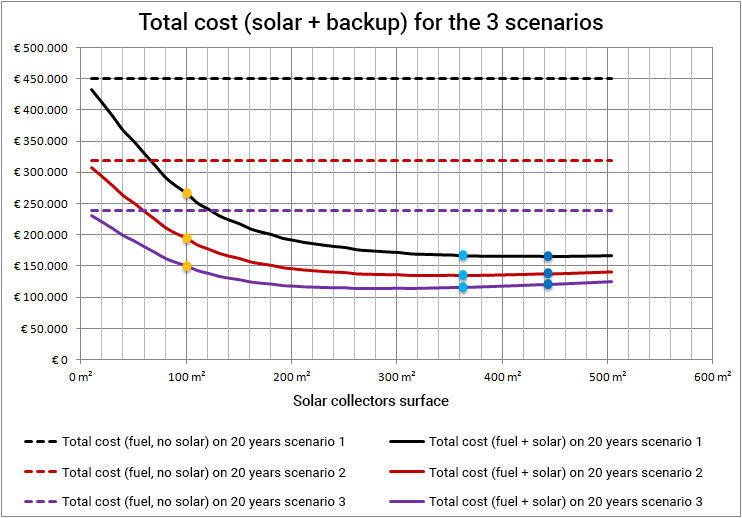 By comparing these curves and on the basis of each customer's own convictions, it is now possible to make the Optimum choice concerning the right collector surface area to install. Sunoptimo advocates the area corresponding to the light blue point on the different curves.

This represents the best compromise between maximizing savings and taking the investment, payback and return on investment into account depending on the evolution of the various variable parameters. Sunoptimo has developed tools to carry out all this analysis for each type of project.

Got a solar thermal project in mind?

Ask for a study